The Northern approach to the Blackwall Tunnel is an unlikely place to find a Tudor love nest and an 18th-century calico factory. Set in a post-industrial wasteland, Bromley Hall was rescued from collapse and demolition by Leaside Regeneration in 2001 at the cost of £1.2M. Hiding behind a Queen Anne façade, it is reputedly the oldest brick house in London dating from 1485 (the date of the battle of Bosworth) and it now sits isolated, facing on to the A120 (M) next to the Red Box Container Business Park and the classical façade of the old Poplar Borough Library. All these premises are now offices tenanted by small businesses—although Bromley Hall is sometimes open to the public at Open House.

It is difficult to believe this was once a Tudor hunting box, a rural retreat by the River Lea and a place to display luxury tapestries and paintings. Inside the building though, there are some exciting clues. A Tudor oak-framed doorway just inside the entrance has a carving of a hound on one side, pursuing a stag on the other. The passageway continues with rare traces of grisaille (black and white) wall painting. It is difficult to fully distinguish now, but this painting contains an elaborate border with mythical beasts and part of an inscription. 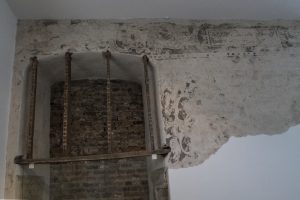 It is the Blount Room opposite which is the real attraction. Although supposedly haunted, you want to linger here to imagine the fine wood panelling (removed some time ago and given to the V&A), and to view the stunning roll-moulded ceiling still in situ, the brickwork fireplace and another more colourful wall painting. This time, the wall painting shows the outline of a large Tudor man fashionably dressed in bright red. He seems to be standing under a classical portico. If this room was used for entertaining, I cannot help but wonder if it was here that Henry VIII first met the teenage daughter of his gentleman bodyguard, John Blount. Elizabeth Blount was to be the King’s mistress and mother of his illegitimate son. 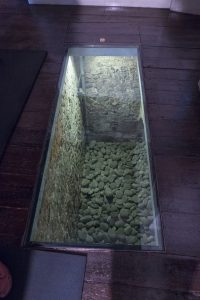 A glass panel in the floor reveals a channel or cistern covering the foundations of an older building beneath. Holy Trinity Priory had acquired the property in 1490, only to lose it again at the Dissolution in 1531. It had formerly been the site of the 12th-century Bramerley Manor.

This building and its outlying grounds have had so many incarnations. It served as a Civil War gunpowder factory, a merchants’ suburban retreat (hence its Queen Anne makeover), a 19th-century retreat and residence for William S Wood, Victorian author and entertainer, a missionary headquarters, a nurses’ home and paediatric training hospital, a garage and a carpet warehouse. However, what interests us most here is its time as a calico works. 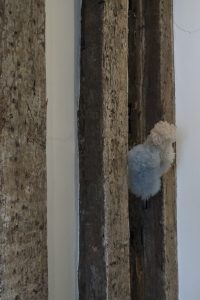 From the 1680s to the 1820s, Bromley Hall descended through members of a very prominent Quaker family becoming one of the largest factories on the River Lea. Benjamin Ollive had been a linen dyer and inherited his father in law’s dye-house at Cripplegate. By 1719, he had become a calico printer; his sons followed him into the business and more extensive premises, with a ready supply of water, had been found at Bromley by the River Lea. Joseph Ollive lived at Bromley and bequeathed his business and the house to his nephew, Joseph Talwin. By 1799, Joseph Foster was managing the firm as Talwin & Foster. He had acquired copper printing plates from a bankrupt printer at Merton in 1783. A rare pattern book of 144 copper plate designs, belonging to the firm, survives in the V&A.

Talwin & Foster’s products had a market both at home and abroad. Their sought-after prints were shipped to America and can still be seen in American museum collections today. A former apprentice of Talwin & Foster, John Hewson, had also journeyed across the Atlantic and set up the first American textile printing factory in Philadelphia, in direct opposition to English exports in the 1770s, advertising his apprenticeship at Bromley Hall. 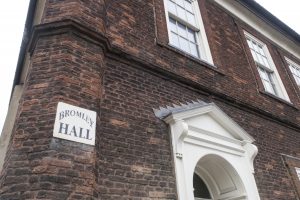 Sitting in a traffic queue waiting to get back into London at the entrance to the Blackwall Tunnel—it might be difficult to envisage this place as a rural retreat or, set as it is in a post-industrial wasteland, an area of a once-thriving industry which supplied expensive textiles to an eager market at home and abroad. If you are able to stop the car and wander round the corner along Bromley Hall Road, take a look behind the newly constructed housing blocks. You can just catch a glimpse of the curve of the River Lea, a reed bed or two and, across the water, a large Sainsbury’s and a distribution centre for today’s global business—Amazon…