In the afternoon, we had a chance to look through Vestry House Museum’s plastics collection, including an extremely large comb used for product displays. Most of these objects were made by the British Xylonite Company and they included many examples of imitation ivory and imitation tortoiseshell. We saw toothbrushes (seemingly not used), vanity cases, hairbrushes and billiard balls. Before the invention of plastic, all of these objects would only have been attainable for the elite few who were rich enough to buy real tortoiseshell and ivory. 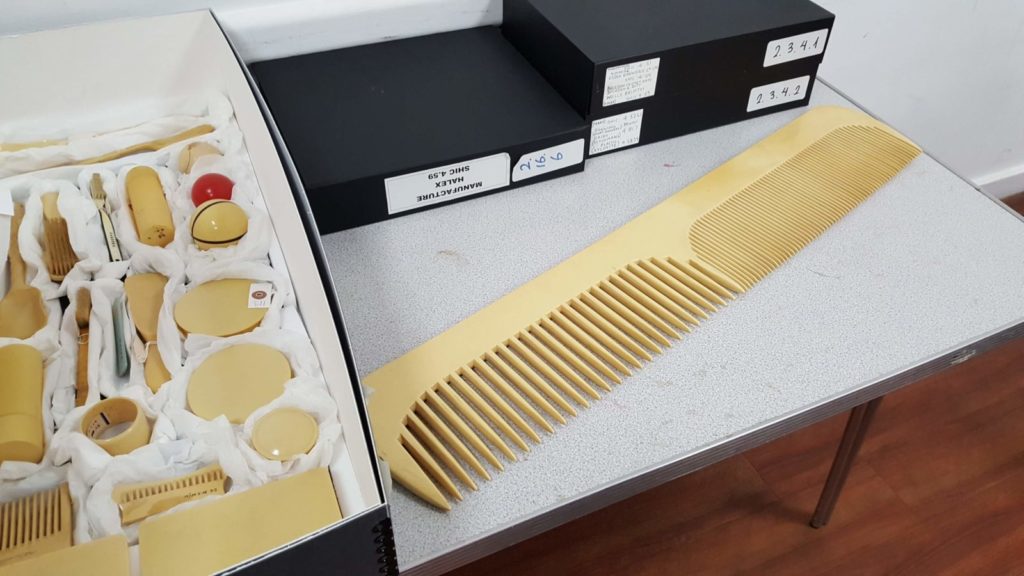 It is noteworthy that while companies such as British Xylonite (based in Hale End, London) made these usually expensive items accessible to the general public, it did not mean that these items became disposable. Perhaps this was because they were made from a new and desirable material?

We also found numerous examples of Halex brand and other British Xylonite brochures advertising the company’s participation in public events, including the Olympia Trade Show that continues to this day. Here the British Xylonite Company championed the quality of its vanity wares, which were considered luxury items.

As time passed, plastics producers managed to create a stable and reliable product which vastly reduced the cost of manufacture. We now see cheap plastics used for everything from food packing, to disposable cups, to cheap clothing. Companies profit from the public perception that plastic is worthless and doesn’t last, which has led to the use-and-dump attitude that confronts us with so many environmental problems today. Seeing the archival materials at Vestry House Museum made me think about how the way people have valued plastic has contributed to its effects on the environment, and how this perceived value has changed so much in the last 150 years.