The Jewish Museum is tucked away on a calm residential street just off of Parkway in Camden. This was my first visit to the museum and I had looked forward to it for some time. I was excited to encounter the collections and hear from those responsible for curating the objects and stories within. The question of how to represent complex and interconnected histories in a coherent way is one that we in the Raw Materials community steering group have been asking ourselves continually as we investigate the history of wood in the Lea River Valley.

We were divided into two groups. One group was whisked away by assistant curator Miriam Phelan. I remained with two others and spent the afternoon with Kathrin Pieren, the collections manager who recently joined the museum. Kathrin took us into a small room where multiple wooden objects and assorted papers were arranged on a large table. We studied an antique toolbox, a massive wooden compass, a chisel and various grooving tools. We heard that the toolbox belonged to an East Ender by the name of Abraham David Leigh. 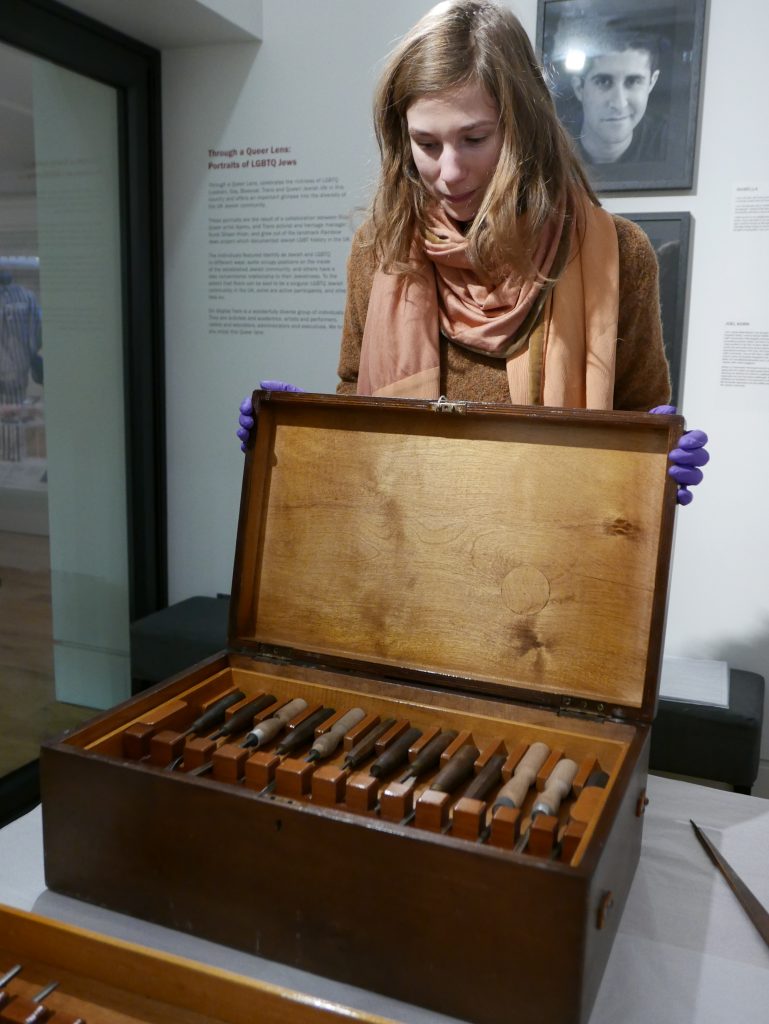 I was drawn to a small handsaw with a wooden handle. We heard that a man had recently approached the museum with pages from his father’s written memoirs and various tools that had belonged to his father and his grandfather. The handsaw was among them. Its handle was engraved with the initials of the grandfather on one side, and the initial of the father on the other side.

I donned protective gloves and picked up the saw. I admired the carved initials and reflected on the family lineage this tool represented. The saw was passed down from grandfather to father – the transmission not only of an object but also of a trade. This brought to life the personal nature of these tools, which seemed imbued with the ghostly presence of the hands that had held them, worked wood and made a living with them. 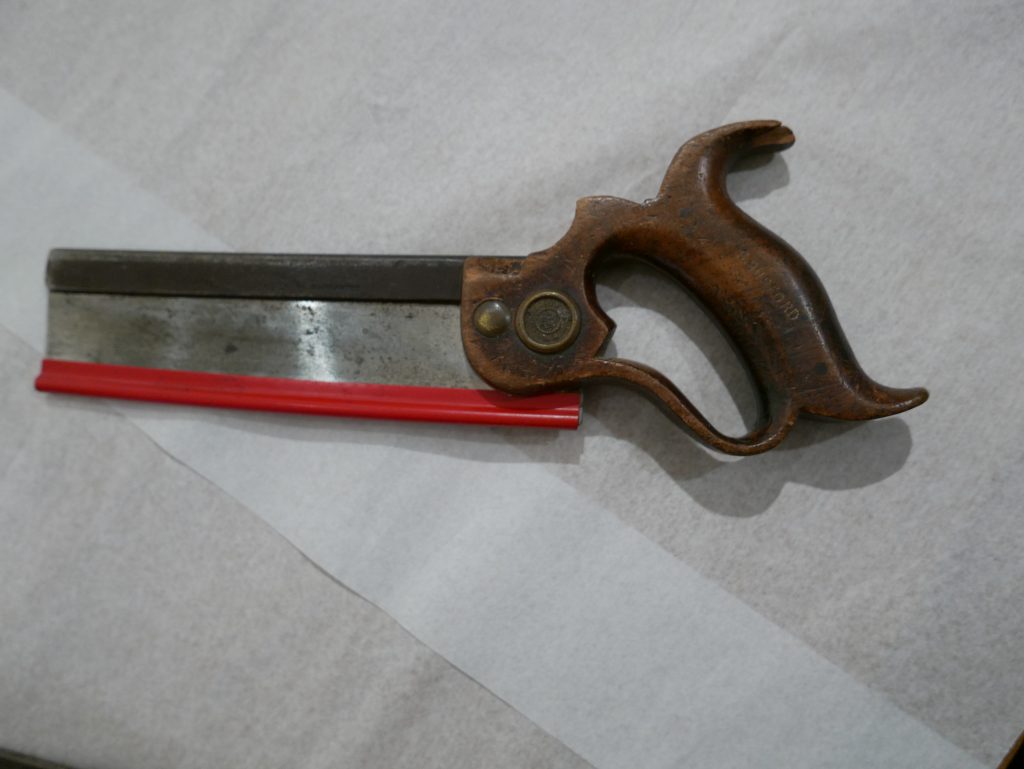 We looked through a Yiddish – English dictionary printed somewhere on Commercial Street in 1901. This dictionary would have assisted local, integrating Jewish communities. We saw photographs of men standing in front of their stores in Shoreditch and Bethnal Green. Looking at these historical photographs is slightly eerie. The faces peering out at you belong to men long dead. You wonder what their names were, what they thought and felt, and whether any of their descendants still live in the East End. 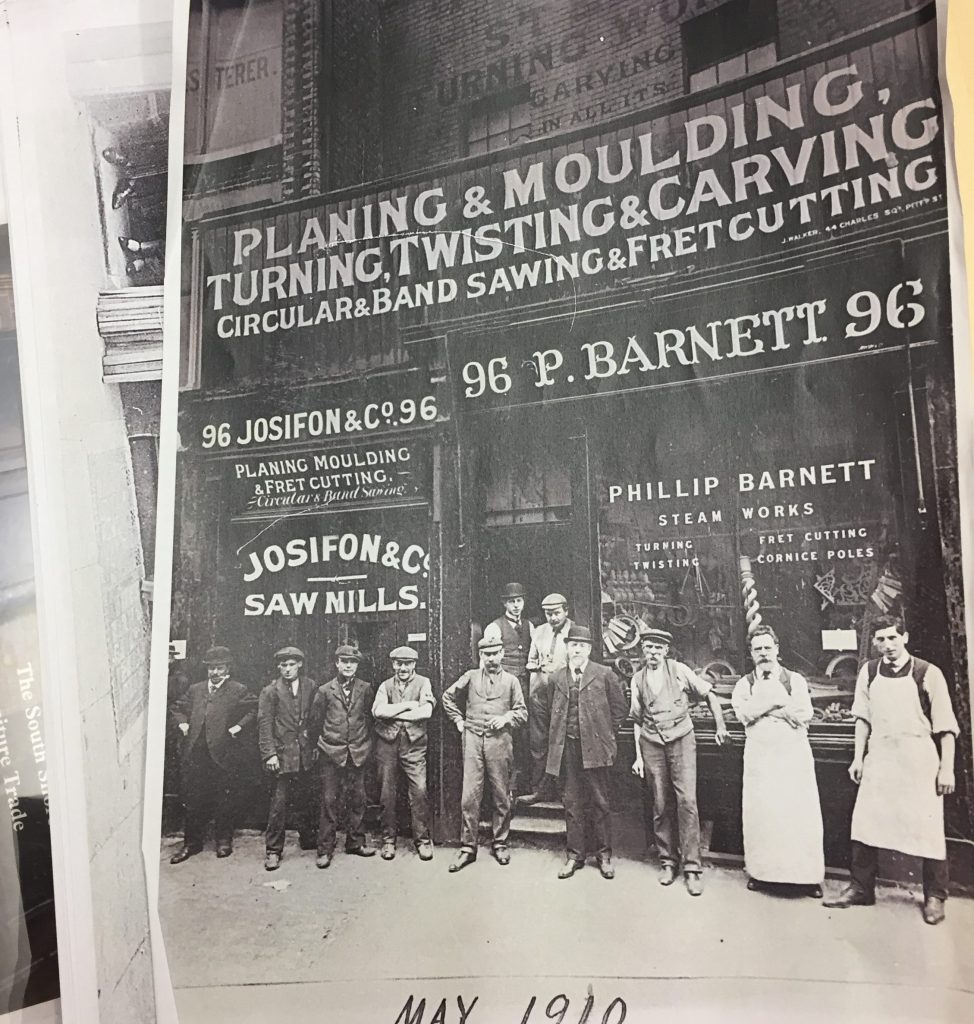 Kathrin led us upstairs and told us a bit about the history and operations of the museum. In terms of collections the museum has two stores: a picture store and the store for objects and papers. Kathrin informed us that the museum holds 30,000 objects in its collection, which encompasses 13,000 photographs and documents as well as Judaica such as ritual objects, Torah scrolls, menorahs, oil lamps, picture collections and portraits. 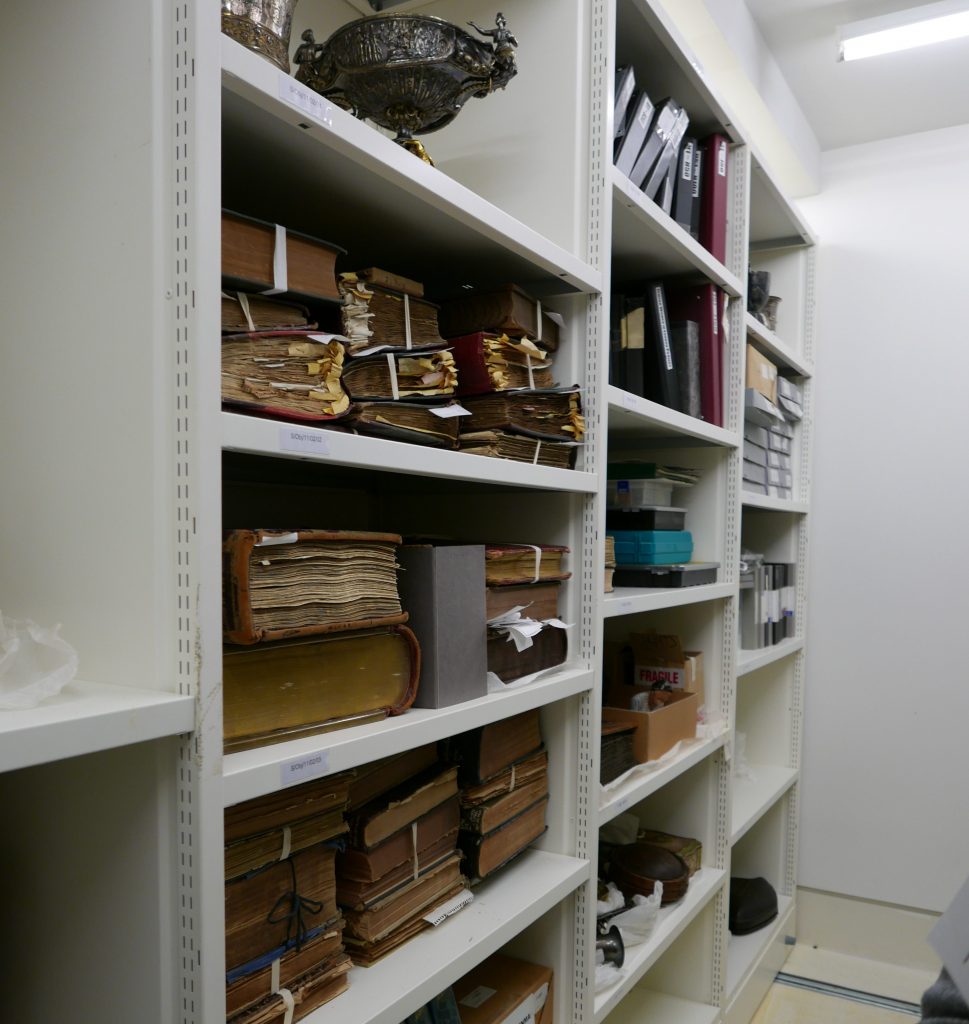 We heard that the Jewish exodus from the East End started as early as the 1910s. The development of the tube system contributed to out-migration to the suburbs. The old handpainted shop fronts were updated, trade was modernised. The wealthier people moved elsewhere, and the poorer people were left behind. Increasing imports of cheaper things made abroad led to a decline in local manufacture. What was still made locally was less often sold locally. “Made in the East, sold in the West” still holds true in many ways in our city today.

I was particularly interested in discussing the approach of the Jewish Museum to collecting the present. It’s important to collect while you still have lots of contextual knowledge but how is it possible to know what’s significant when there’s so much stuff everywhere? Which objects will future historians consult in an effort to try and understand our present era? This was a tangential and fascinating conversation. 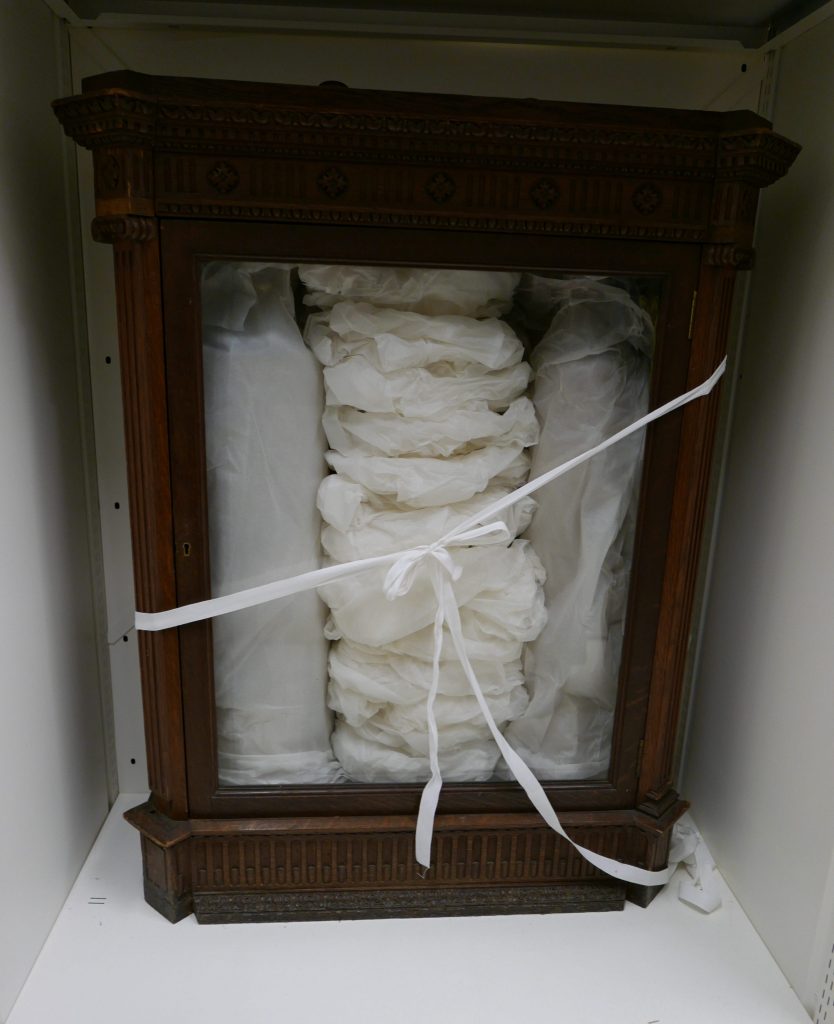 Once we were back on topic we viewed a beautiful engraved cabinet including a Torah scroll from the 18th century. The scroll can be wound by a mechanism on top of the cabinet, therefore allowing it to be read through the glass without being touched. The museum’s collection of objects is housed in a series of winding stacks. We saw wooden chairs from a friendly society, sewing tables and suitcases, which seemed deeply symbolic of the Jewish history of peripateticism and exile. Some of the suitcases are associated with the Kindertransport. Like the saw, these suitcases radiated energy. 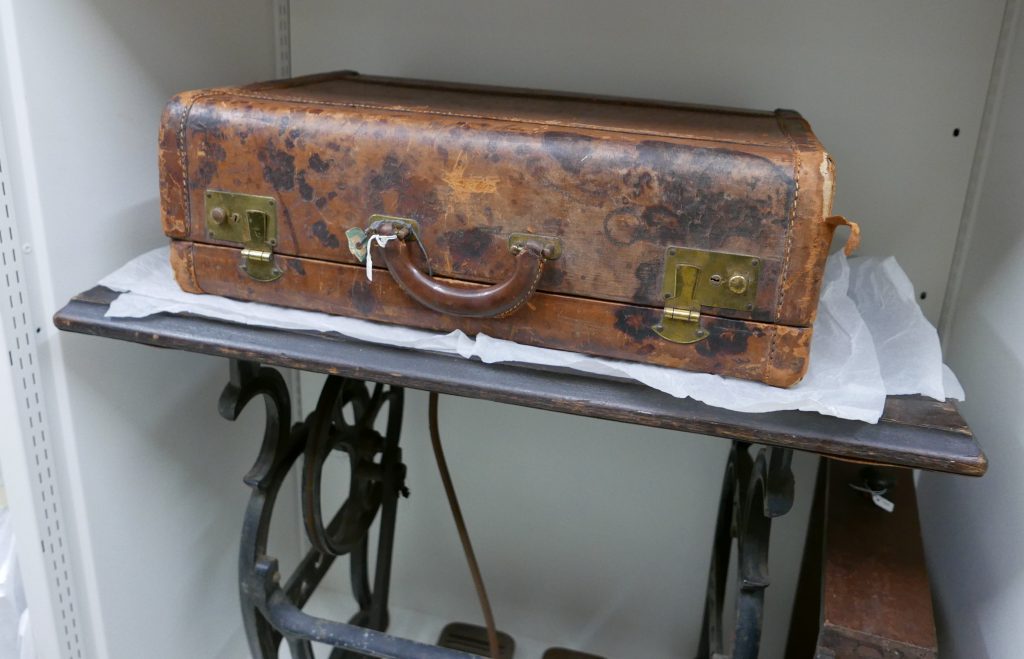 I feel there’s a tension between the desire to conserve history and the desire to let historical objects live. When you place an object behind glass, rendering it untouchable, in what way does this deny its identity by denying its function and purpose? We were entertained by a story about a Seder plate that was donated to the museum with the stipulation that the family can use the plate at Passover. Every year, museum staff remove the plate from its case using protective gloves and the same level of care that would be given to any object within the collection. The family collects the plate, eats from it and returns it to the museum for safekeeping until next year.

Before we knew it our visit was at an end. I had been so taken with the objects and our various discussions that I had forgotten to ask any of the questions that I arrived with. Who were these Jewish carpenters? Where did they come from and where did they go? In what ways can it be said that the history of wood in the Lea River Valley is bound up with the histories of Judaism in the East End? 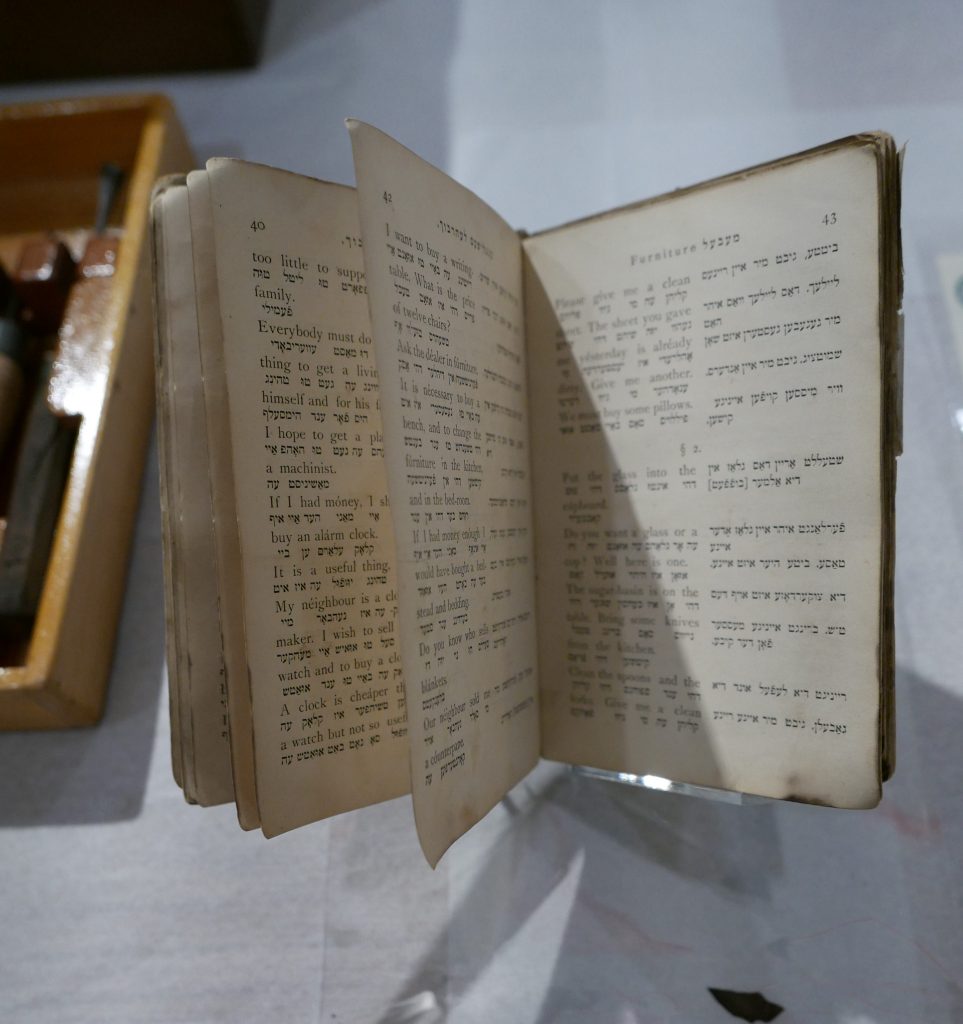 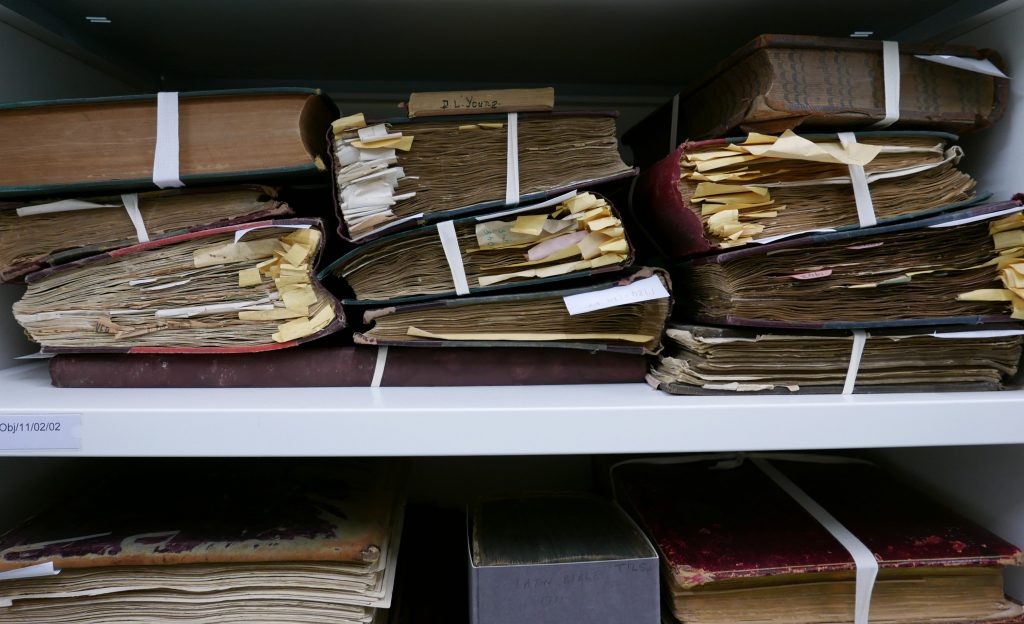 The pictures were taken with permission of the Jewish Museum London.