‘Aunque la mona se vista de seda, mona se queda.’
– You can put silk on a monkey, but it’s still a monkey.
The Spanish expression for ‘You can’t make a silk purse out of a sow’s ear’.

Chapter one: on fitting and context

It’s impossible to separate the history of industry from the history of migration. The Jews, like so many other cultures, moved freely all around the world in search of work, and what did they discover? That the work is where the demand for services is, and hence where the money is. Another question might be… Why is the money there? Just like the end of a thread in a piece of fabric, if you keep pulling, you’ll soon reveal its inner structure (whilst also possibly destroying the fabric).

Textiles were very in demand in London, and so immigration levels soared. Some migrants even had to change their original craft to adapt to the market. The industry dictated their jobs. That is what immigrants must do, they must adapt, or fit themselves to the market.

During our visit to the Jewish Museum we saw the amazing Yiddish-English Dictionary with loads of English phrases translated into Yiddish. Literally and phonetically – with accents stressing the syllables for some tricky words. 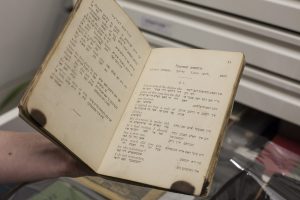 A large percentage of the Jewish community was involved in the tailoring trade in the Western world. During the dawn of the twentieth century this finally paid off, and many of them were able to move to other areas like Hackney. Why? More space, larger houses and cheap rents around the Lea Valley. We know that Lebus Furniture moved to the Lea Valley in 1903, triggering an industry-wide move, with many other factories, including textile ones, moving to that area. The introduction of the singer sewing machine also made it more affordable for immigrants to set up their own workshops. 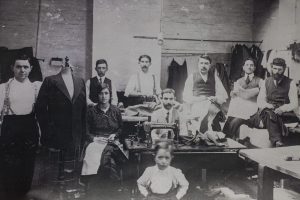 Chapter two: a wolf in sheep’s clothing, the wedding dress and the Battle of Cable Street

Something caught my attention in the Jewish Museum’s exhibition. In the migration area, there was a large panel with small boards attached displaying quotes. Underneath each board the author and date of the quote was listed. All of the quotes referred to comments made by politicians or powerful members of the media regarding immigration – some of which were quite shocking. The clever thing about this display was that before lifting and revealing the when and the who, one would think that these quotes were said many years ago before the Second World War even, around the time the Holocaust. But surprise! Some of them were said in the 21st century. The same wolves in sheep’s clothing?

We now see the Battle of Cable Street as a historical stand against fascism, and this is frequently invoked in contemporary British politics. But again, it was the working-class people, the unknown, the immigrants, not the Establishment, who faced fascism in the streets, as well as terrible working conditions and pay. Luckily these were improved after several strikes and demonstrations by the East Tailors.

Kathrin Perrin from the Jewish Museum Archives was showing us a wedding gown. It was an incredible piece of clothing. But what was more incredible was that Kathrin showed us a picture of the wedding for which the gown was used. We could see the bride, wearing it. She said that soon, that dress was going to be exhibited in the main collection  for a few different reasons. Firstly, the importance of the dress itself, also the importance of showing how wedding used to be, and lastly because apparently that same couple was involved in the Battle of Cable Street.

We underlined how important it was to show people that, although we always want our heroes to be recognisable political or social figures, it is the ordinary people that are the real heroes for societal changes like this. People as ordinary as that couple enjoying their wedding day, as ordinary as all of us admiring that dress

As the Yiddish–English Dictionary might have said: I should prefer to drink something, coffee or tea, it is all the same to me. 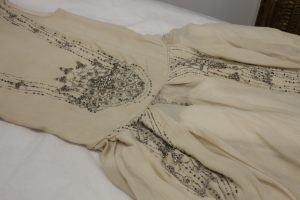 Years, centuries of cloth designing and there are still patterns that are timeless. The piece of clothing that covers our body from the waist to the ankles has been reproduced, revisited and reformulated throughout the centuries to finally arrive at the most efficient solution: trousers. Imagine, layer after layer of experimentation, of stitching, of transmitting the experience, the sewing traditions… by anonymous people, again. Trousers could have different shapes but their internal structure will remain the same. Trousers, are trousers, are trousers. 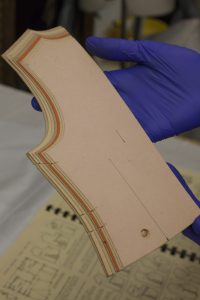 Again, in the name of tradition, our contemporary world needs to revisit some old patterns. Again, we could see how, during the boom of tailoring in London back in the day, women had to stay in their homes sewing, and were not allowed to go to the factories. And again, a textile related Spanish expression pops up in my mind: ‘Unos tienen la fama y otros tejen la lana’. Translated: ‘Some do all the work and others take the credit’ (some have the fame, some card the wool).

We all see how the textile world (and hence the fashion world) might have changed in shape but not in the pattern.

Why is it commonly accepted that women are supposed to be in charge of the design, the patterns and the sewing in domestic contexts – at the service of the family and the men – but when it comes to the fashion world, the money and the prestige, men are the ones that get the credit?

There are now even more renowned female textile creatives, but still the imbalance is outrageous. We sometimes forget how damaging some patterns are in the name of tradition. We also sometimes forget all of the work that the unknown women and immigrants did for us, the people who worked in the factories, who fought for our rights. To all of you, we salute you.