Newham Archives are housed in a fairly unremarkable single upstairs room in Stratford Library. What is remarkable though, is the fine collection of maps that we were treated to and the amazing knowledge that Jenny the archivist shared with us. Through looking at maps of the Lower River Lea area of West Ham borough, we were able to see how the environment changed from 1745 to 1916 as industries developed along the river.

The 1745 map was a rural picture of tidal mills (Three Mills and Abbey Mills), bakers, silk weavers and calico manufacturers, all of which lay across the dividing line of the River Lea in Essex. The residents here were known as “Londoners over the borders”. West Ham was a country village, Canning town was just marshland and the area known as Chobham was a pig farm. 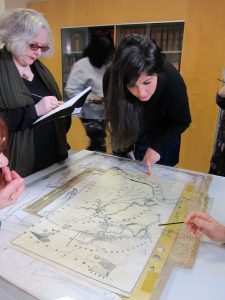 Moving on to the 1867 map the story was very different. Both the Industrial Revolution and the railway had made their mark on the landscape and most of the farms and allotments had vanished to make way for housing. The River Lea was lined with all sorts of industry, including chemical, dye and print works as well as jute spinners—located next to the Tesco at Bromley-by-Bow today. Some decades earlier, a map from 1821 showed the calico grounds of Edwards, Laurence and J.Cullum, along with printing grounds belonging to Laurence and Littler. Bromley Hall was also identified on the map as a calico printer.

In addition to the maps, the archive also had a collection of Kelly’s and other trade directories which were very useful for locating the exact addresses of various industries and for generally getting an idea of types of businesses in the area. 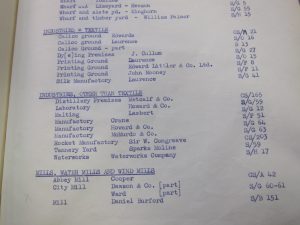 Between the maps, the directories and Jenny’s knowledge, this was an extremely interesting, informative and useful visit. I would certainly like to go back there sometime to have a further look at those wonderful maps.