I had always wanted to walk through the main doors of the beautiful white Queen Mary University building, and at last, I had a reason.  However, my visit was short as I was directed back outside to the more recently built library where our archive visit was to take place.  Arriving in the study room, a collection of archive boxes lay on the table, full of dark green covered books. There were copies of The Labour Party Conference Annual Report dating back to the early 1920s and The Garment Worker (The magazine of the National Union of Tailors and Garment Workers) dating from the 1940s. 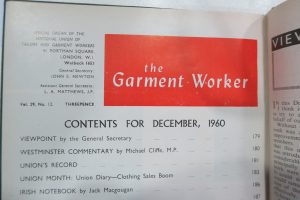 After a short time of scouring pages or flicking through, it became apparent to us all that there was not much specific to East London or the Lea Valley—or if there was it would take lots of reading and more than two hours to find it!

However,  the steering group managed to discover many interesting facts, related to the garment industry, which were indicative of life at various times. This included a notice detailing “a vigorous drive” to sign up new members to the Union in Hackney. There was news of a “Personality Girl” contest held in Bethnal Green Town Hall (1990)—a more PC version of the Beauty Contest held as part of the London Trade Union Festival. Amongst the pages of the Labour Party Conference Annual Report were long lists of all the organisations represented at those Conferences. The number of organisations linked to the Garment industry was quite astounding with almost every aspect of the trade represented. Along with weavers and spinners were dyers, bleachers, finishers, pattern makers, lace makers, shuttle makers, spindle and flyer makers and warp twisters to name a few. These unions mostly came from northern towns. 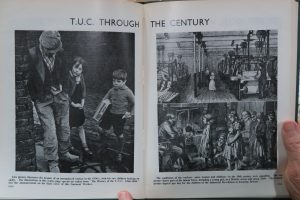 One fantastic discovery was the Union Song “Come on Gal” which was publicised with great enthusiasm in a 1960s copy of The Garment Maker.  The Union were looking at modern methods of publicity to keep up with the changing times and had enlisted American folk singer Peggy Seeger, along with singer and BBC producer Ewan McColl and clarinet player Bruce Turner—an ex-member of the Humphrey Lyttleton Band, to record the song.  It contained a “snappy lyric backed by a tune styled in the modern manner” and members were urged “when you have a record party, see that your Union’s record is played.” 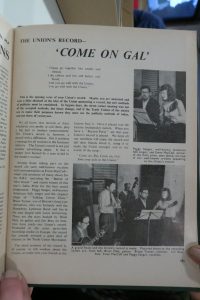 An interesting piece of information was shared by archivist Naomi Sharp who informed us that the Salvation Army once ran a “Knitting House” in Clapton, set up for “wayward girls”—very much in the Lea Valley area. Naomi was once an archivist at the Salvation Army and told us that records of the Knitting House were held at their archive in Camberwell.  A visit has been arranged!