In a world littered with ‘disposable’ plastic, from bottle tops to honey dispensers, it may feel odd to find such objects behind the glass displays of a museum collection. The Museum of Design in Plastics at Arts University Bournemouth houses an extensive collection of items falling under the category of ‘plastic’. The term ‘plastic’ refers to any natural, semi-synthetic or synthetic material that can be softened by heat and moulded. One quickly comes to realise just how many plastic objects make up our material world, from electric kettles, to yoghurt containers, to bread bags, to Kevlar windscreens. Tucked away on the second floor of the university library, the Museum of Design in Plastics’ exhibition space consists of a square room lined with mirrored glass cabinets. It houses a rolling exhibition mapping out the many uses and histories of this incredibly versatile material. 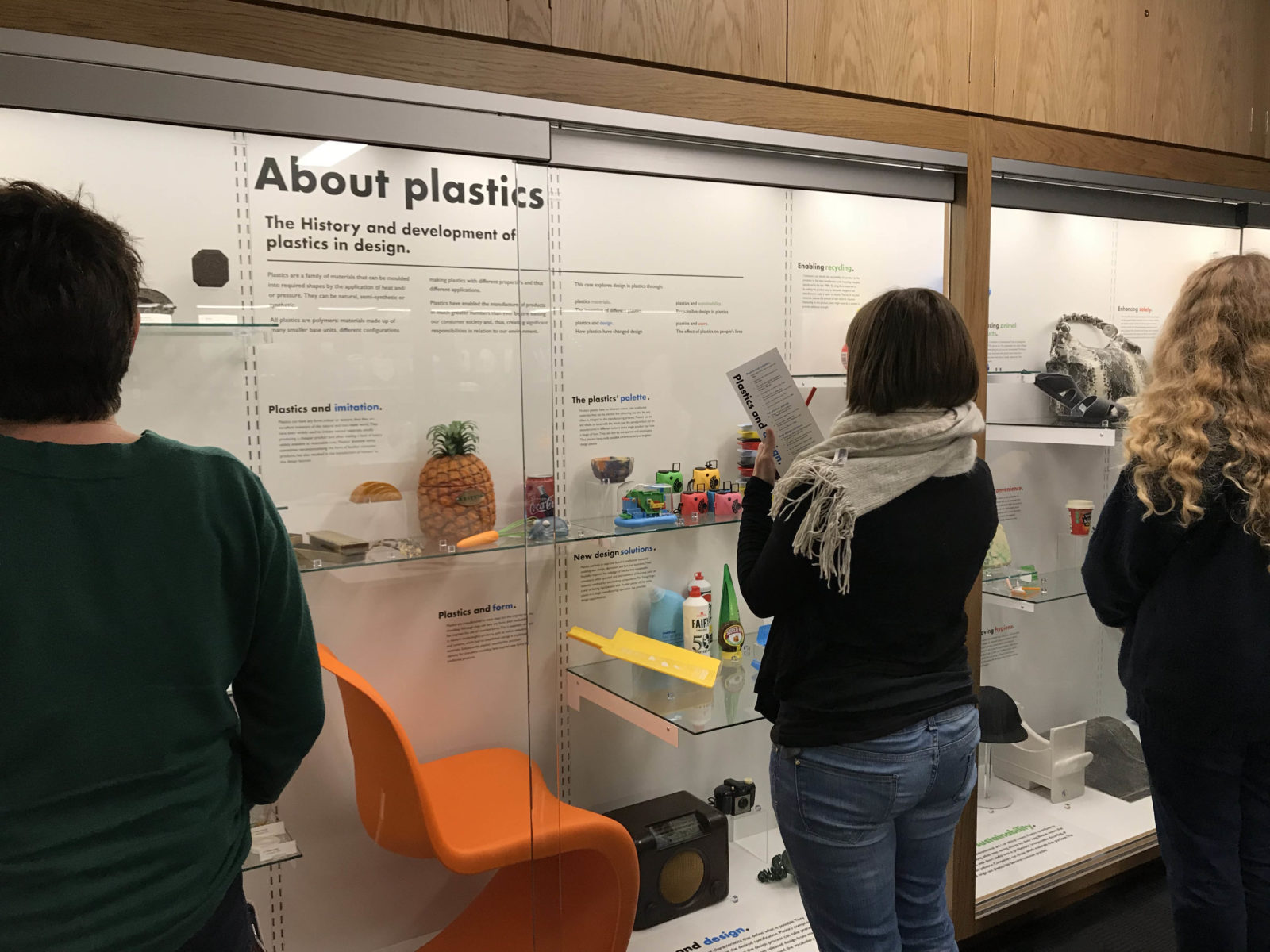 However, for me, the real treasure lies behind the doors of the museum archive. This rich resource, rendered available through a full catalogue on the MoDiP website, includes natural, semi-synthetic and synthetic objects as well as documents such as photographs of early manufacturing labourers and the first plastic company adverts. 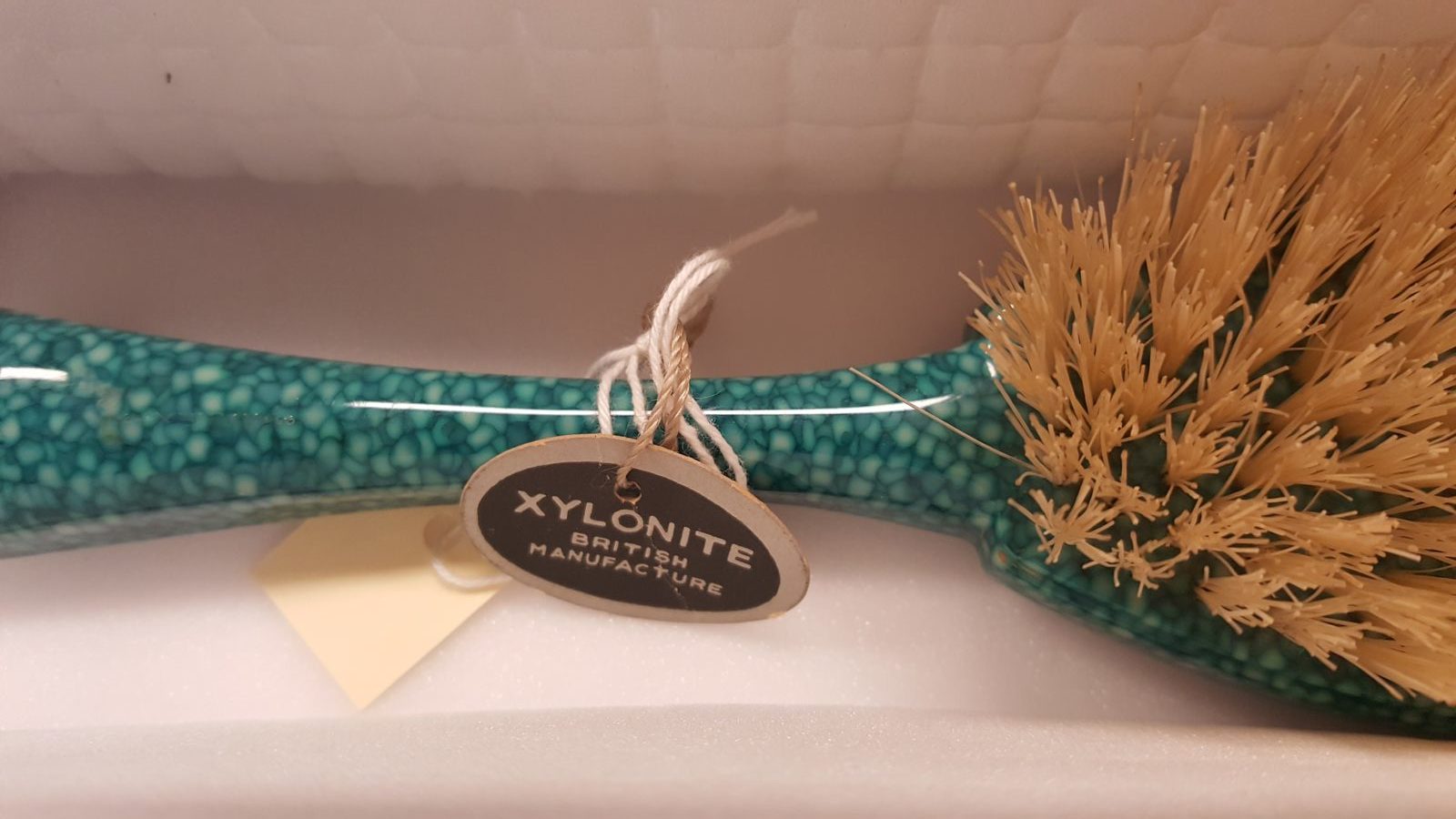 We have come here to take a look at some artefacts from these early plastic companies, in particular objects made of Parkesine and Xylonite; two brand names that stand for the compound cellulose nitrate – the first plastic. We are viewing a handful of objects that give us a picture of the varied application and appearance of this Victorian material. First among these objects is a lavish aqua-green bathroom set which resembles a kind of precious stone. The surface of these ornate objects is pressed into a dotted pattern to recall shark skin, a common Victorian motif referred to as Shargreen. This set includes a bristle hair brush, a mirror and a container to store human hair. Plastic was often used for bathroom articles, as it was cheaper, waterproof and did not decay; or so they thought. The archivists proceed to uncover a comb. The humble comb was one of the most popular uses for cellulose nitrate, launching it onto the market at a much cheaper price to its wooden, silver or ivory counterparts. Plastic was hygienic, flexible and could be manufactured en masse. A series of decorative objects followed these, among them some intricate plastic-coated lace, a section of what looked like a wooden bowl or bracelet inlaid with mother of pearl and a tiny plastic cover for the Holy Bible. It’s hard to believe that these precious objects could have led on, in some way, to today’s single-use plastic bags. These products appealed to an aspiring upper-middle-class who could perhaps not quite afford the real thing, but welcomed these ingenious lookalikes. 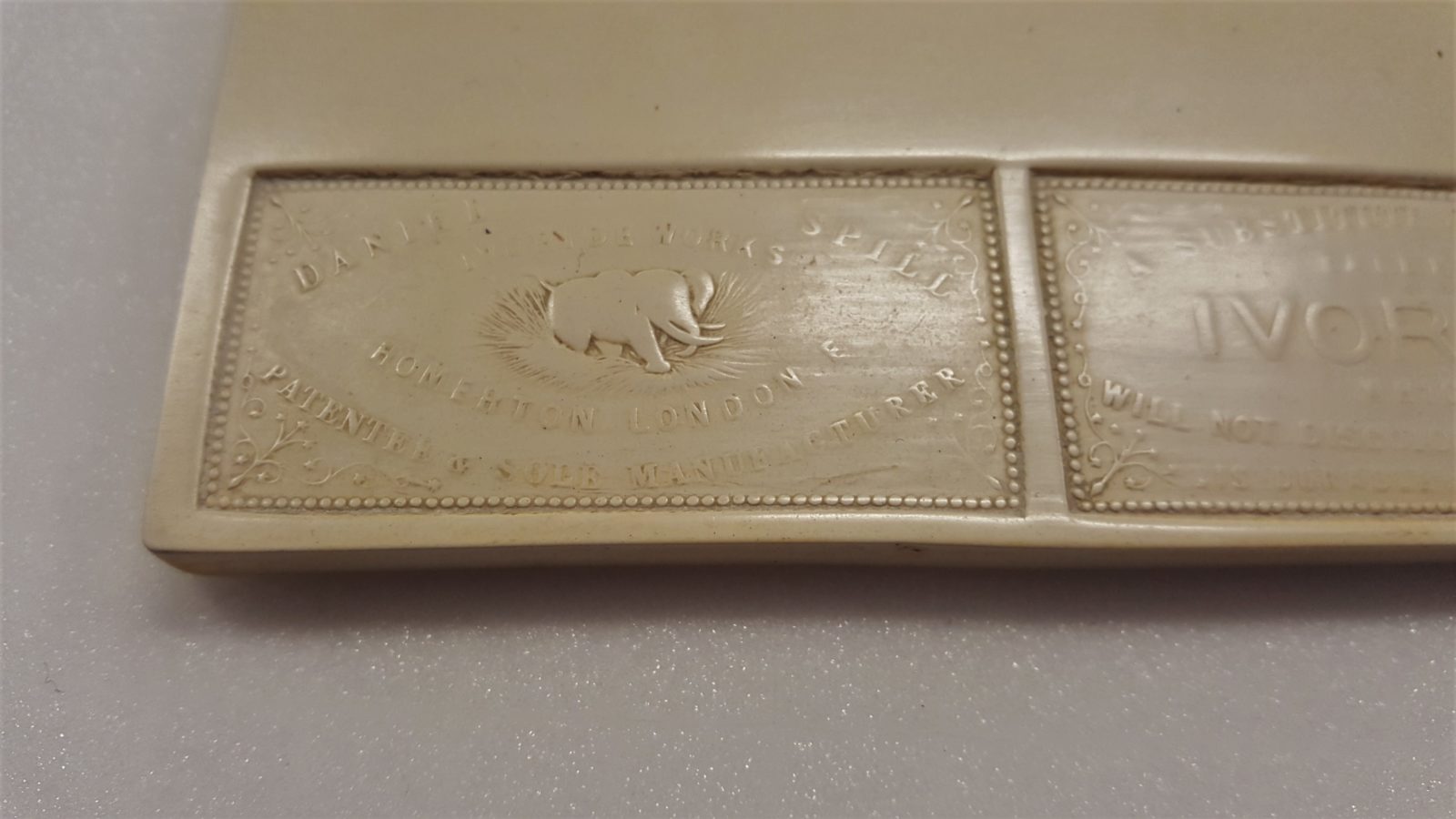 The objects that I found most compelling, however, were the ones that most closely resembled natural materials: ivory, tortoiseshell and various types of animal horn. A sample of Ivoride from Daniel Spill’s Homerton factory displaying an elephant in relief and a billiard ball in the same material, replaced an ever scarcer natural resource. But cellulose nitrate did have its flaws. Not least of them was the fact that it was extremely flammable. Such billiard balls were rumoured to occasionally spark on collision, while hair clips made out of this material were known to catch on fire! In a talk by Carolyn Clark of the Plastics Historical Society, we heard that it was not uncommon that a woman sitting too close to the fire wearing such an ornament, to suddenly awake to a burning head of hair. Another major downside to cellulose nitrate is that it is rather unstable. Left under direct light for too long, it begins to crumble. A chemical reaction takes place within it, eating away at its inner chemical structure and eventually causing it to collapse. What was once an impenetrable casing, as smooth as slabs of marble, disintegrates into splintered fragments of matter. We are lucky enough to study a handful of these degraded objects: some broken hair pins and a couple of trays, one of them almost completely disintegrated. For me, there is something cathartic in seeing these objects decay, watching them complete their life-cycle. One wonders what will happen to the zip-lock, single-use wrappers that seem to live forever, what will it take for them to degrade too?